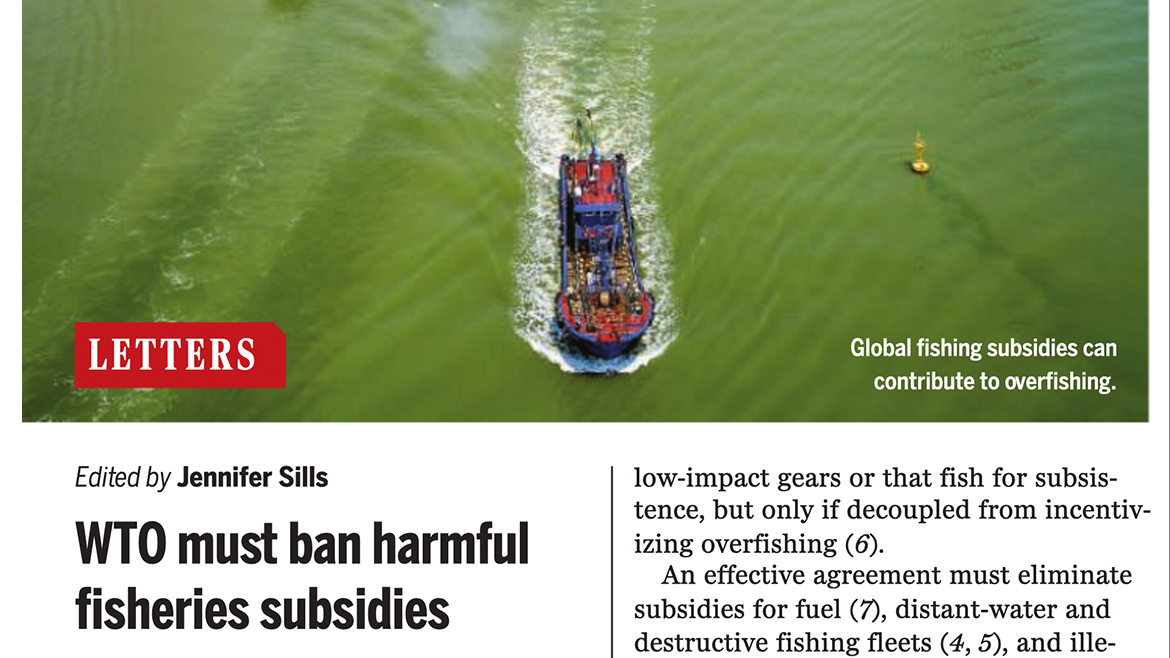 In a letter published by Science on 29th October 2021, two hundred and ninety-seven scientists from across the globe are calling on the World Trade Organisation (WTO) to place a ban on fisheries subsidies. The authors of the letter view subsidies on fishing inputs as a major contributing factor to the overfishing of fish stocks in all oceans of the world. The letter was submitted to Science by scientists from about two hundred and twenty-two institutions, forty-four countries, and across six continents. Among the petitioners of the WTO, were thirteen scientists affiliated to the Centre for Coastal Management - Africa Centre of Excellence in Coastal Resilience (CCM-ACECoR) who co-authored the letter.

The letter for Ban on Fisheries Subsidies

The letter calls on the WTO to deal decisively with the issue of harmful subsidies on fishing inputs, especially, those that lower the cost of fuel and vessel construction among others, by abolishing their subsidisation:

"... WTO members must prohibit fisheries subsidies that cause harm, such as those that lower the cost of fuel and vessel construction and those that provide price support to keep market prices artificially high. Subsidies to distant-water fishing fleets must be eliminated to prevent overfishing on the high seas and in waters under national jurisdiction. Such subsidies threaten low-income countries that rely on fish for food sovereignty."

The letter, however, calls for a consideration of an exemption to the rule for artisanal non-commercial fishing provided it does not promote overfishing, saying:

"Exceptions to the rules—known as special and differential treatment—should be considered for small-scale fishers that use low-impact gears or that fish for subsistence, but only if decoupled from incentivizing overfishing."

Our interest as a Centre

The CCM-ACECoR conducts research and outreach on fisheries governance and sustainable fishing methods towards the conservation of fish stocks in Ghana and West Africa, thus, the support offered to the global team of scientists on this petition. The petition was led by Professor Rashid Sumaila who is Chair of the International Scientific Advisory Board (ISAB) of the ACECoR Project at the Centre for Coastal Management. Other members of the ACECoR ISAB who co-authored the letter are Prof Amanda T. Lombard, Prof Francis E. Asuquo, Prof John P. Walsh and the Director for the Centre, Prof Denis W. Aheto. Other members of the CCM-ACECoR Team contributing as co-authors of the letter are Dr Precious Mattah, Dr Isaac Okyere, Dr Noble Asare, Dr Alberta Jonah, Dr Evans Arizi, Dr Rodrigue Pelebe, Mr Joshua Adotey and Mr Ernest O. Chuku.