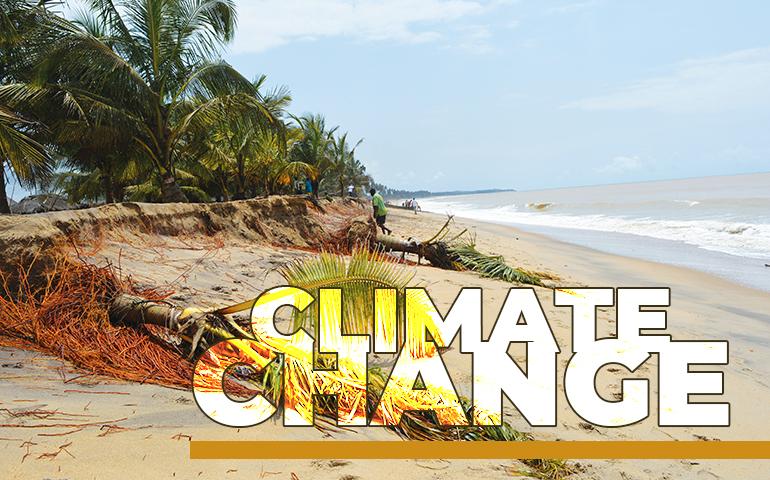 Climate change represents a major threat to coastal ecosystems and communities. In many areas around the Africa‘s coast, the combined projected threats of sea level rise, increased temperatures and reduced rainfall will place unprecedented stress on species, ecosystems and human settlements and industries. Climate change and variability have significant future and immediate consequences for the world’s coasts, the goods and services provided by coastal ecosystems, and coastal inhabitants. Accelerated coastal erosion, loss of land and property, flooding, saltwater intrusion, shifts in the distribution and abundance of valuable marine habitats, species and biodiversity, and the accelerated spread of exotic and invasive species are major issues resulting from the impacts of climate change. Other important factors include increased mortality, loss of coastal wetland ecosystems, decline in fish catches and productivity, ocean acidification for instance has potential widespread effects on marine ecosystems. Therefore the ability of marine ecosystems and habitats to adapt to climate change impacts can be increased by reducing other stressors such as overfishing and land-based pollution.

Reducing these current stresses will increase the resilience or ability of the environment to adapt to future impacts, thus reducing threats to human welfare (Stanturf et al., 2011). Coastal settlements and landscapes also face multiple natural hazards that are being influenced and worsened by climate change either through sea level rise or flooding. Given the foregoing impacts, countries of the sub-region have begun to educate and raise the level of public discussion through the formulation of a national policies and adaptation and mitigation strategies. There is the need for downscaled scenarios for hazards and climate change adaptation planning and research to help examine full range of impacts on the various sectors. There is also the need for in depth studies to fill in the gaps as a basis for informed decisions for development and policy planning in coastal areas of Africa, especially in low-lying communities confronted with climate-induced disasters leading to forced migration, social inequalities and exclusion.

At the end of the project, the following deliverables are expected:

Effects of Climate Influences on the Abundance and Distribution of Ethmaloosa fimbriata in Coastal Ecosystems.
by Blessing Ebi Ogonodi
Modelling and Assessing the trends in Wave Climate over the past four decades in the Coast of Gulf of Guinea
by Dahunsi Adeola Michael
Assessing Socioeconomic Vulnerability of Coastal Community in Ketu South Municipal to Flooding induced by Sea-Level Rise.
by Daystar Babanawo
Dynamic Modeling of Storm and Coastal Flooding along the Coast of Ghana
by Mubarick Raj Salifu
Impact of Climate change on the Livelihoods of Fishers in Coastal Fishing Communities
by Temitope Adejoke Adewale